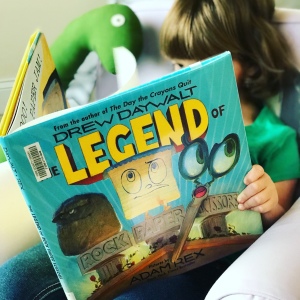 Hello, friends! Today book is The Legend Of Rock, Paper, Scissors, written by Drew Daywalt and illustrated by Adam Rex, a stupendously ridiculous origin story for the famous game.

Long ago, there were three great warriors, all hailing from a different land: Rock of the kingdom of Backgarden, Scissors from the village of Junk Drawer, and Paper from the empire of Mom’s Study. Having defeated the mightiest warriors of their own lands, they wander on in the hopes of finding a warrior who can best them and relieve them of their ennui. Then one day, in the mysterious land of Two-Car Garage, the three warriors meet. Who shall be victorious… or, will the mighty three discover that they are evenly matched?

What a fun book! With crazy king-fu film-inspired illustrations and some hilariously dramatic text and dialogue, this gives a fresh and silly look at a staple of play that everyone knows well, injecting it with some fun. It’s a great read-aloud, ESPECIALLY if you can get into the voices and the melodrama of the exchanges between adversaries – there are some jokes that had JJ squealing, and quite a few that gave me a chuckle as well. The ending is somewhat telegraphed, but it honestly doesn’t detract from the enjoyment of the story – if anything, it makes many of the jokes and visuals of the final showdown even punchier. The length is fine, and we had a lot of fun with it. This is a great laugh to share with little bookworms, especially slightly older ones. Baby Bookworm approved!