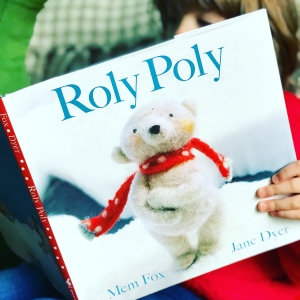 Hello, friends! Our book today is Roly Poly by Mem Fox and Jane Dyer, a sweet and wintery tale of brotherhood.

Roly Poly lives alone with his mother and father, and that’s just fine with him. He has his room and his bed all to himself, he gets to eat the fish he catches without having to share, and when he plays with his favorite walrus tooth, nobody bothers him. That is, until he wakes one morning to find someone else sleeping in his bed: Monty, his new brother. And now, everywhere that Roly goes, Monty tails behind. The newcomer is always climbing all over him, trying to play, and trying to touch his fish and favorite walrus tooth! So when Monty accidentally gets stuck on an ice floe – one that is slowly drifting out to sea – Roly Poly initially says good riddance. But when Roly hears his little brother’s pleas for help, he finds he can’t abandon Monty in his hour of need.

Sweet. This tale of new siblinghood hits some of the classic beats one might expect, and the resolution is heartwarming with a touch of realism; Roly Poly accepts and loves his brother, even though he still finds him annoying sometimes. Yet Fox and Dyer – veteran kidlit creators – know exactly how to make a simple concept sparkle. The guileless, matter-of-fact tone of the text perfectly captures the inner dialogue of a little one, and the incredible needle-felted characters against miniature backgrounds create visuals that are simple, accessible, and full of heart. JJ was particularly drawn to this one, with the earnest characters who behaved like believable children (despite being polar bears), and the cuddly-cute artwork. The length was great for a storytime, too. This one would be a great gift for any big siblings who may be dealing with their own little brother or sister woes; a reminder that irritation is temporary, and family love is far stronger. Baby Bookworm approved! 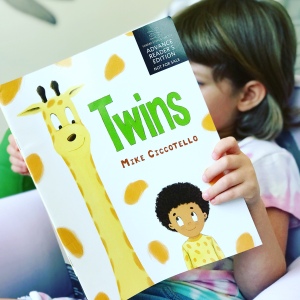 Hello, friends! Our book today is Twins by Mike Ciccotello, a silly yet sweet tale of a rather unusual set of siblings.

Beings a twin is lots of fun: you always have a pal to play with, someone who knows you better than anyone else, and sometimes people can barely tell you apart! Of course, that’s not to say twins are exactly the same – even the things they like to do together, they might do differently (like building snowmen, or eating salad). They might even have fights or disagreements, just like all best friends, and need some space from each other for a while. But that’s the best thing about twins: they always come back together (after all, they’re a perfect pair… even if one of them is a giraffe).

A cute tale of twins from an author with twin sons, this reads as a straight and sentimental look at what it’s like to be part of a set of twins. The joke is in the illustrations – the twins are a little boy and his brother, a giraffe. This peculiar set of circumstances is never explained to the reader, and the joke seems to illustrate the legitimate point that each twin is very much their own autonomous person, even while they share this special bond with one another. It’s a gag that will amuse little ones, especially those who are twins or have siblings otherwise very close in age. The illustrations are a bit simple but very charming, and the length is fine. JJ enjoyed it fine, but this is definitely one that will mean more to the subjects of the story themselves; still, it’s Baby Bookworm approved! 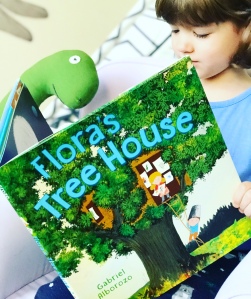 Flora watches her little brother Will as he rambunctiously plays around the tree that holds her treehouse; he’s more than a little rude and annoying, but he’s a wonderful muse for her artwork: crayon drawings inspired by his limitless imagination and the adventures he conjures with it. This day, Will curiously follows Flora up the ladder to her tree house (despite the “No Wills Allowed!” sign), and marvels to find the walls filled with drawings of his escapades. While Flora is initially nonplussed by his presence, she is quickly charmed by his fascination with her art, and the two bond by reminiscing over the memories of Will’s adventures. Will is especially surprised to find that even when he didn’t notice her, Flora was always there with him, exploring the cosmos or battling mummies, or even off on adventures of her own. Realizing that these playtimes were something they actually shared all along, Will invites Flora to be a part of his newest, a ocean-faring quest beset by pirates – Flora is happy to volunteer her treehouse as their vessel.

Lovely! For whatever reason, there seem to be a lot of books about the bond between sets of sisters or brothers, but fewer about brother-sister relationships, and this one is a heartwarming example of how important those sibling relationships can be. Flora and Will’s sibling rivalry – and eventual harmony – feels organic enough to be realistic while setting a nice example for readers, and the focus on both imaginative play and creativity is wonderful. The illustrations are sweet, and are wisely centered around the crayon drawings, further inspiring little bookworms to create and pretend on their own. The length is fine, and JJ liked this one; overall, a solid read, especially for families with siblings. Baby Bookworm approved! 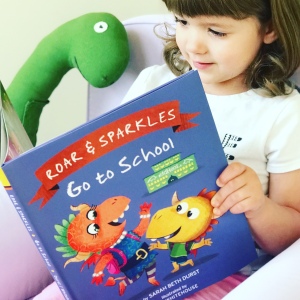 Hello, friends! Our book today is Roar & Sparkles Go To School, written by Sarah Beth Durst and illustrated by Ben Whitehouse, a back-to-school story with a scaly twist.

Roar the dragon dreads the end of summer: it means no more playing at the beach with his beloved big sister Sparkles, for one. But more pressingly, he has to go to his first day of school! Roar is scared of what will be expected of him – will he have to breath fire all by himself? Or fly over an erupting volcano? Sparkle assures him that the first day will be easy, and that he will like school. Roar still frets right up to the moment Sparkles walks him to class – but inside, he sees toys, a friendly teacher, and new friends. After a day of fun, Sparkle picks Roar up from class, and the younger dragon presents her with a drawing of his favorite thing in the world: his big sister.

Very sweet. Telling the well-worn story of the apprehension before the first day of school, the dragon-themed setting and characters inject some fun and color. These details are clever, such as burnt sandwiches for lunch and a Cindragonella storybook (in which the heroine declines waiting to be rescued in favor of becoming a brave knight herself – AWESOME). The vivid, colorful illustrations can feel a little busy at times, but also work in some truly delightful visual gags. The length is great, and JJ loved it, so this one is definitely Baby Bookworm approved! 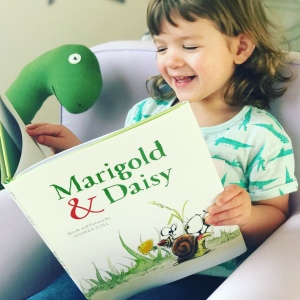 Hello, friends! Our book today is the delightful Marigold & Daisy by Andrea Zuill, a story of the highs and lows of sisterhood.

Life was pretty great for Marigold – that is, until her ultra-adorable, uber-annoying little sister Daisy was born. Daisy is such a pain! Everybody fusses over how cute she is, and she follows Marigold everywhere, and she gets away with everything! Marigold feels overlooked, under-appreciated, and most of all, irritated. In fact, she’s pretty sure that Daisy has a nefarious evil plan to take over the world using her super-powered cuteness. But when Marigold is bullied by another bug, she might be surprised at who comes to her rescue – and at what she has to say!

Very sweet. The transition from only child to big sister or brother can be a difficult one for littles, so we’re always on the lookout for books that deal with the range of emotions they can go through during this time. This one hits a lot of relatable emotions (Marigold’s sense of being pushed aside when the new baby comes, for instance) while also conveying the all-important moral of the story: sisterhood isn’t always perfect, but there’s no friendship or relationship like it. The text is easily read aloud, and has a bunch of great comedic beats that make it fun. The illustrations are wonderfully expressive, using a mix of pen-and-ink and watercolor to bring the world of snails and insects to life. The length is perfect, and JJ loved it. A great story for helping little ones laugh through a time of transition, and we recommend it highly. Baby Bookworm approved! 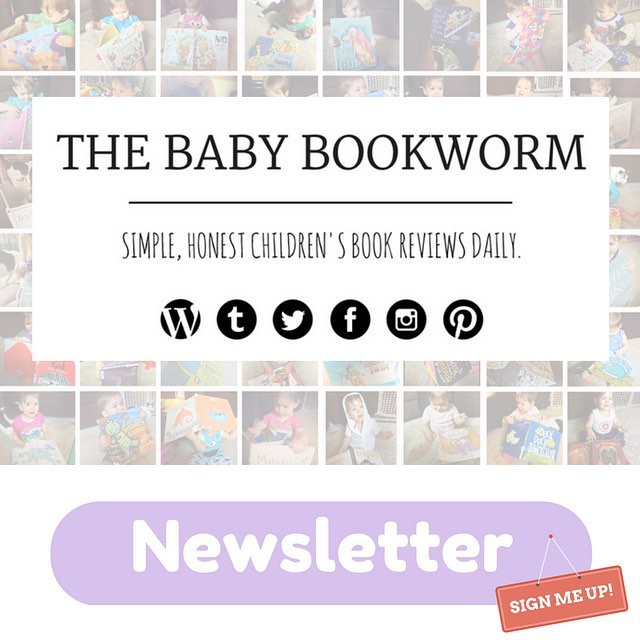