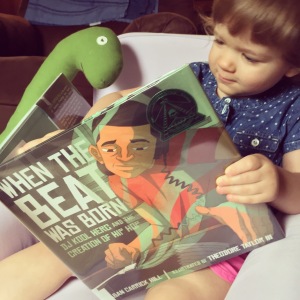 Hello, everyone! Today’s book is When The Beat Was Born: DJ Kool Herc And The Creation Of Hip Hop, written by Laban Carrick Hill and illustrated by Theodore Taylor III, an awesome tale of a revolutionary musical innovator and his contribution to the birth of hip hop.

Clive Campbell loved music of every kind, and growing up in Jamaica, there was no music scene hotter than the block parties hosted by the local dancehall DJs. When Clive moved to New York City, he brought his love of music and DJing with him. After earning the nickname Kool Herc on the basketball court, Clive and his sister Cindy threw a back-to-school party one summer night at their apartment building on Sedgewick Ave. Clive set up his audio system, stepped up to the turntables, and unleashed his signature style of mixing and rapping on the crowd. And just like that, DJ Kool Herc was born, and he would go on help create an entire genre of music: hip hop.

This was an awesome book! Music history fans will love how the story of this seminal era of musical experimentation is told. For those unfamiliar with the origins of hip hop, this is an awesome primer for all ages that introduces the figures, styles and theory that brought hip hop to be. The illustrations are colorful, lively, and have a distinctly musical feeling about them, which is perfect. The length may be a bit much for the smallest bookworms, but JJ enjoyed it start to finish. This is a great one, especially for young DJs and MCs looking to learn more about the roots of hip hop and the people who brought it to life. Baby Bookworm approved!

JJ is a 6-year-old bibliophile who lives with her Mama, Dada, two dogs, and cat in Kansas.