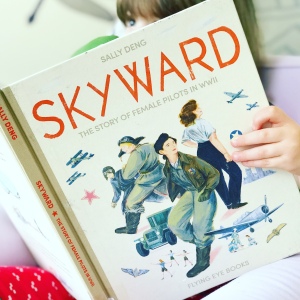 Billed as “creative nonfiction”, this large-format illustrated chapter book introduces us to three fictional young women: Hazel, a shy American girl of Chinese heritage; Marlene, an English spitfire; and Lilya, a passionate child of Russian farmers. All three are exposed to aviation at a young age, and all three become determined to be pilots, despite the rampant sexism of the day. When WWII breaks out, the three girls attempt to use their hard-earned skills to assist the Allied efforts, but are turned away with laughter and sneers… that is until they each find organizations in desperate need of pilots of any gender. Hazel and Marlene are selected for civilian volunteer groups (WASPs and ATA respectively), and Lilya becomes part of the famed “Night Witches” 588th Bomber Regiment. All three face unique challenges in the line of duty, as well as sadly similar ones (constant harassment and condescension, substandard supplies and conditions, and the ever-present threat of danger that permeates wartime). When the war ends, they are cast aside without a second thought; yet today, we remember and celebrate their sacrifices and courage, in service of not only their countries and the Allies, but of all the future female aviatrixes that followed.

Powerful. It’s astounding how often female servicemembers’ accomplishments are swept under the rug (as we pointed out earlier this month, only ONE woman has ever won the Medal of Honor), so seeing this loving, heartfelt look at the lives of the aviatrixes of WWII is a joy. Deng creates rich, compelling characters to act as the reader’s guides, and illustrates each page with a beautiful sense of detail and scope, breathing life and emotion into each artwork (particularly lovely is a full-page spread of Marlene’s astonished face during her first flight, accompanied by a single line of dialogue: “‘Oh,’ she gasped”). This is a chapter book, and better suited for slightly older bookworms if read in a single sitting, but absolutely a must-read. Baby Bookworm approved! 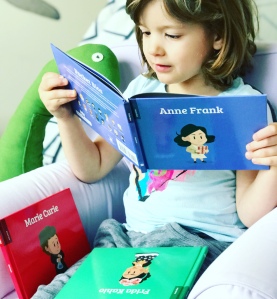 As with previous installments in the series, each book walks the reader through a concise look at its subject’s life, including notable events, works, and accomplishments. Each page focuses on a different event or time period, accompanied by an illustration on the opposite page, and all three books include backmatter with maps, timelines, and more.

As with the three that we reviewed for Black History Month, these biographies are fairly well-done (if occasionally faulty) primers for these remarkable women. Curie’s is strongest, covering her quest for education despite her gender, her romance with Pierre Curie and their work together, her two Nobel prizes, and her premature death (though little effort is given to describing her actual work). Kahlo’s is also quite good for the same reasons, but suffers greatly from not showing her actual art, romanticizes her tumultuous relationship with Diego Rivera, and completely ignores her open bisexuality. And while it tries to capture her indomitable spirit, Anne Frank’s is a mess in terms of tone; illustrations of Hitler surrounded by saluting Nazis, or of Otto Frank weeping despondently over the deaths of his daughters, portrayed in the series’ bright, bobble-headed character style is cringingly inappropriate. As with previous books in this series, these aren’t bad as primers, but picture book biographies have been done far better for each woman. Otherwise, the lengths aren’t bad, even for small bookworms, and JJ enjoyed them okay. I would say skip Frank’s, but Kahlo and Curie are Baby Bookworm approved.

(Note: Copies of these books were provided to The Baby Bookworm by the publisher in exchange for an honest review.)

Hello, friends! Our book today is A is For Awesome: 23 Iconic Women Who Changed The World, written by Eva Chen and illustrated by Derek Desierto, a delightful alphabet book that introduces young readers to notable “sheroes”.

After a hearty welcome by Juno (protagonist of Chen’s previous book Juno Valentine And The Magical Shoes), the reader is given one-sentence introductions to (and occasionally quotations of) female role models of note, organized alphabetically by the letter of their first name – A is for Amelia Earhart, B is for Beyoncé, C is for Coco Chanel, and so on. The women range from scientists, entertainers, suffragists, athletes, artists, lawmakers, and even a bonafide goddess. X, Y and Z represent eXtraordinary You (accompanied by a full-page mirror), and the Zillions of adventures you’ll go on – just as awesome as all the ladies that came before.

What else can I say? AWESOME! Meant as a primer for the littlest bookworms, this colorful and exuberant look at some deserving female trailblazers is a wonderful way to introduce the power of women to younger and pre-readers. The selection of featured figures is well-balanced, representing a varied range of skintones, religions and backgrounds, though most of the ladies are American. Desierto’s art is simple and friendly, using elements of mixed media cutouts for hair, clothes, and surroundings to frame the warm, open faces of the subjects. It makes each woman feel like a new friend, and works perfectly. JJ adored this one, especially the mirror on the final page, and it was a fairly quick read as well. A must for any young feminist’s bookshelf, and emphatically Baby Bookworm approved!

Hello, friends! Our book today is Bold & Brave: Ten Heroes Who Won Women The Right To Vote, written by Kirsten Gillibrand and illustrated by Maira Kalman, a celebration of ten notable figures in the women’s suffrage movement.

Beginning with an introduction to strong female influences in Senator Gillibrand’s (D-NY) family, the focus shifts to women of the American suffrage movement who inspired them to pursue gender equality. Each woman is given a stunningly-illustrated portrait on one page with a brief yet detailed biography of their life, influences, and accomplishments on the opposite, focusing primarily on the work they did for women’s suffrage but sure to include other aspects of their legacy (imperative for figures like Harriet Tubman and Sojourner Truth). Familiar faces like Susan B. Anthony and Elizabeth Cady Staton are present, as well as perhaps lesser-known icons like Inez Millholland and Jovita Idár. At last, the book celebrates the passing of the 19th amendment in 1920 then jumps forward to the landmark Women’s March of 2017, showing that while the fight continues, its fighters are legion, and indefatigable.

Awesome. Giving a fantastic overview of ten women who should be household names for everyone, each woman is brought to life in brief yet impactful style. Gillibrand does a fair job of balancing her subjects’ backgrounds and unique challenges, and even honestly points out that there were plenty of women then (and unfortunately, today as well), who attempted to exclude racial minorities from the movement. Yet as good as the text and structure are, it’s Kalman’s art that shines brightest, with bold colors, striking portraits, and a general sense of feminine, feminist pride on every page. The length may be better for slightly older bookworms, but JJ was so enthralled by the art that she happily sat through to the end. A gorgeous and stirring reminder of those who fought for women’s voices, and what we owe their sacrifice. Baby Bookworm approved!

Hello, friends! Our book today is Wild Horse Annie: Friend Of The Mustangs, written by Tracey Fern and illustrated by Steven Salerno.

From childhood, Velma Bronn Johnston’s first love was horses. Her father was a horseman in Nevada who captured wild mustangs and tamed them for sale; he taught Velma to ride and encouraged her passion. When she contracted polio, spending months in a full-body cast and left with a bent spine, facial disfigurement, and full-body chronic pain, horses were her relief and reason to keep going. After marrying and founding a riding school for children, Velma takes notice of the rapidly dwindling numbers and inhumane treatment of the wild mustangs, and devotes her time to having legislation passed to protect them. Beginning with letter-writing campaigns and town hall speeches – and fighting against verbal abuse and death threats – Velma earns the nickname “Wild Horse Annie”, meant to be disparaging until she adopts it with pride. Utilizing a nationwide “pencil brigade” of children to write letters and raise funds in the mustangs’ defense, Johnston’s efforts lead to federal legislation protecting them from harm.

I had never heard of Wild Horse Annie, and I’m so glad that I have now. Her story speaks to every child who marvels at horses, her love for them inspiring her through difficult times. Annie’s sunny yet steely personality shines through each page, and the reader gets a real sense of what’s at stake for both the horses and Annie if they fail (there is a passage that unflinchingly notes that she was threatened with being “hanged from a tree” among other things; subtle streaks of blood are shown on horses that have been abused). I also appreciated how the story focuses on Annie’s thousands of partners: the children who took up the fight for the mustangs and were the tipping point for many politicians on the matter. The illustrations are also lovely, capturing the unique color palette of the American West and Annie’s fierce, unwavering energy. The length makes this better for slightly older bookworms, but we enjoyed it immensely. Baby Bookworm approved!